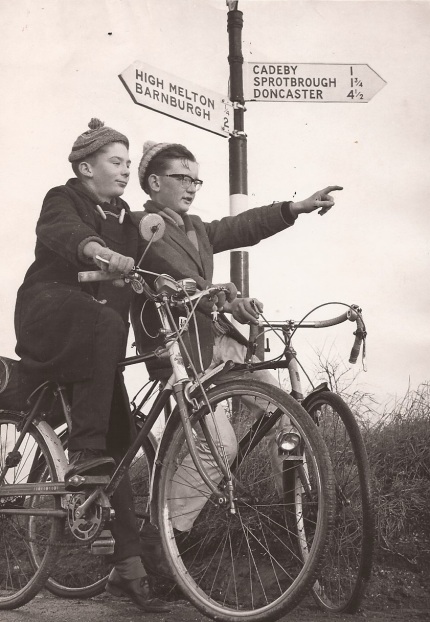 It was a cold, crisp, sunny New Year’s Eve in 1965 when Cousins Terry, aged 13 and Stephen, aged 11, decided to follow the Badsworth Hunt – on their bikes. The traditional Hunt planned to meet in High Melton on this particular Friday; a location familiar to the boys as their Granddad, George Frederick Freeman, farmed at Melton Brand.

A photographer / reporter had been dispatched to cover the colourful event on behalf of the Yorkshire Post. At the end of the day, he noticed the lads on their bikes and stopped, asking if they would “pose” in front of the signpost indicating High Melton and Barnburgh to the right and Cadeby, Sprotbrough and Doncaster to the left (map ref: OS Sheet 111 – 514.022). The resulting photo was published in the Yorkshire Post with the caption ‘Enjoying a last spin in 1965’. Of course, upon seeing this photo their parents were enlightened as to exactly what they had been up to for the day!

Terry says that he can’t remember much about his own bike; only that he cycled often and met up with his cousin at the farm for bike rides. Looking at the photo he did notice that a speedometer was attached to the front wheel and believe it or not, a rear view mirror to the handlebars, which he believed to be for overtaking. He must have pedalled very hard to do that.

Stephen’s bicycle was a Sunbeam, to which he made some minor adjustments of his own, modifying the angle of the bike handlebars to make it appear to be what he thought of as ‘cool.’ Tinkering with bikes led to Stephen’s love of tinkering with motorcars. This progressed into his passion for the stripping down and rebuilding of Classic cars!

Both of the boys were pupils of The Percy Jackson Grammar School at the time. Terry Freeman passed to go there in 1963 and Stephen Roberts in 1965. Terry was in Class 3P and Stephen in Class 1B in 1966 when official photographs were taken.

By Janet A. Roberts née Kitson with thanks to Terry Freeman and Stephen Roberts

Footnote: The Badsworth Hunt, being one of the oldest in the UK, was founded in the 1720’s. There was also the Bramham Moor Fox Hounds, founded in 1740. The two Fox Hunting groups decided to merge and established the Badsworth and Bramham Moor Hounds (BBMH) in 2002.